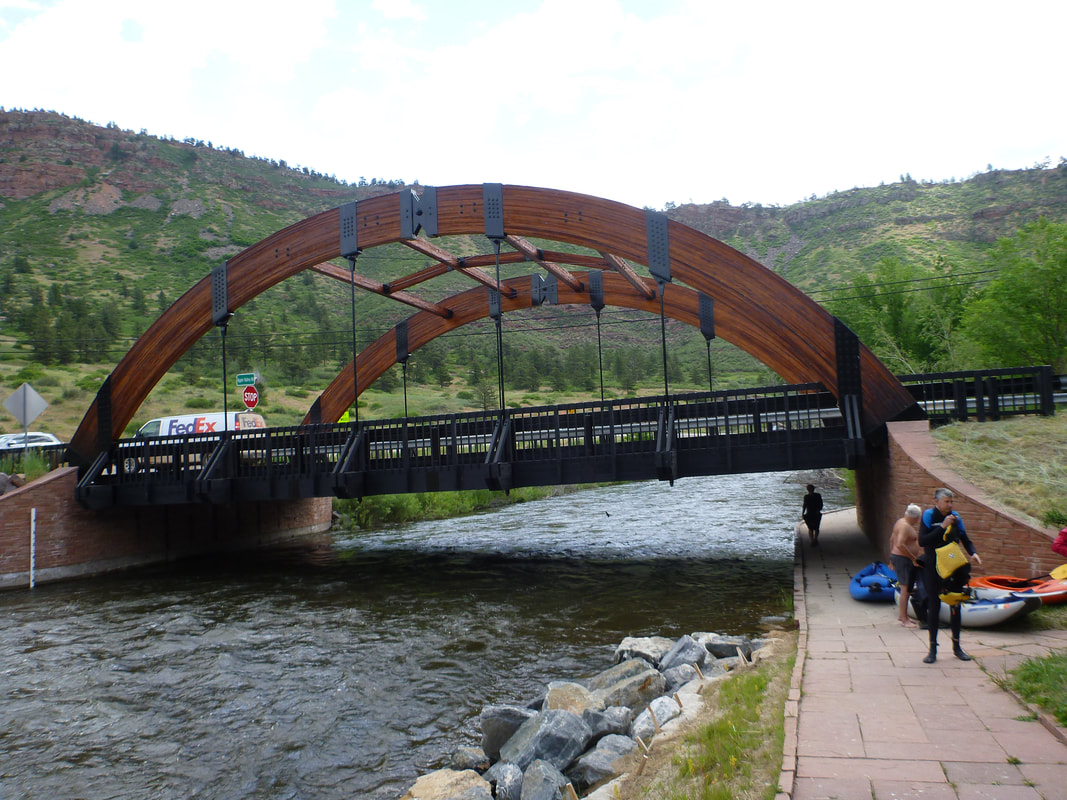 The bridge over the St. Vrain River on Apple Valley Road. This is where we put-in.
General Information about Floating Apple Valley

Date: Get the following information from the Host's email.
Time:
Place to Meet:
Host:

Description: The Apple Valley run is about 3 miles long and starts at the wooden arched Apple Valley bridge (3 miles away from Lyons). This run has changed significantly since the flood and has increased slightly in difficulty. The 2013 flood scoured out the riverbed, deepening it by a couple of feet. The first mile now has ledge drops of various types about every 50 yards. The over-hanging trees that made this a cooling summer float have been ripped away by the flood.

About 1.5 miles down, shortly after some art sculptures, the river divides around a long skinny island. Take the left channel to avoid a big drop with rocks at the bottom. If you take the main channel right you will see a horizon line, the  "Treehouse Island" drop. It's a BIG ledge drop with a hole below on the right, rock in the middle, and bumpy on the left.  It's an easy scout by taking out on the island, river left. If you want to sneak it, just take the left channel around the island. This channel starts about 70 yds upstream of the drop and treehouse.

Continuing on you will circle thru the Planet Bluegrass venue and arrive at the Lyons whitewater playpark [Meadow Park]. The features have been smoothed out and basically you can just go down the center of each drop. There is one that has several waves after it at 350 cfs and on that one, you can go left or right to avoid the big waves.

You now pass under the Hwy 7 bridge and move between homes in Lyons. The "Mid-Town Slide" has been removed and doesn't exist anymore.

The South St. Vrain now joins from the right and brings additional water. Continue on down to Black Bear Hole. It is easier to exit at the Black Bear Hole since you can drive in and out easily.

The Apple Valley run has been changed again and is now a SUPER-FUN BEGINNER RUN FOR KAYAKS at the 200 cfs level, as described below.   The 2013 flood scoured out the riverbed, deepening it by a couple of feet.  And now further man-made work has changed it  giving it a friendly pool-drop, pool-drop nature.  Starting at the arched wooden AV bridge, it's a 3-mile run.

The first mile now has small, fun ledge drops of various types about every 50 yards. About 1.5 miles down, just after a pedestrian bridge, the river divides around a long skinny island. If you take the main channel right you will see a horizon line, the Treehouse Island drop. It is an ugly, no-fun three-foot ledge drop, very rocky. You can easily scout and portage this by taking out on the bank near the kids treehouse. Or you can totally bypass this drop by taking the lesser left channel around the island. Catch this left channel immediately below the pedestrian bridge crossing the river.

Continuing on you will circle through the beautiful Planet Bluegrass venue and arrive at the Lyons whitewater playpark (Meadow Park). THIS PLAYPARK HAS BEEN TOTALLY REBUILT THIS SPRING! It now has many small drops and is easier than it was before, with not much rock dodging. But don't expect to go to Meadow Park to see the new water features. Meadow Park is tightly fenced off for construction and will probably not reopen during this kayaking season.  So just put in above Lyons and cruise thru with no problem.

You now pass under the HWY 7 bridge and move between tightly packed homes in Lyons. Don't look for the Mid-Town Slide 3-ft drop as it has been totally removed, probably as a flood control measure.

The South St. Vrain now joins from the right and brings additional water.  Continue on down to Black Bear Hole and pedestrian bridge or even 1/4 mile further to the site of the former October Hole [no longer there].  Going to October Hole allows you to run three additional moderate drops in and below Black Bear.

You will now find it hard to stop smiling in the afterglow of this amazing fun run!


Directions to the Apple Valley bridge:
After the trip you people usually go out for beer and lunch at Smokin' Dave's BBQ in Lyons, or another nearby restaurant.

Let the host know if you have any questions. Also, it is best to tell the host you are coming so they know how many to expect and they can notify you of last minute changes. 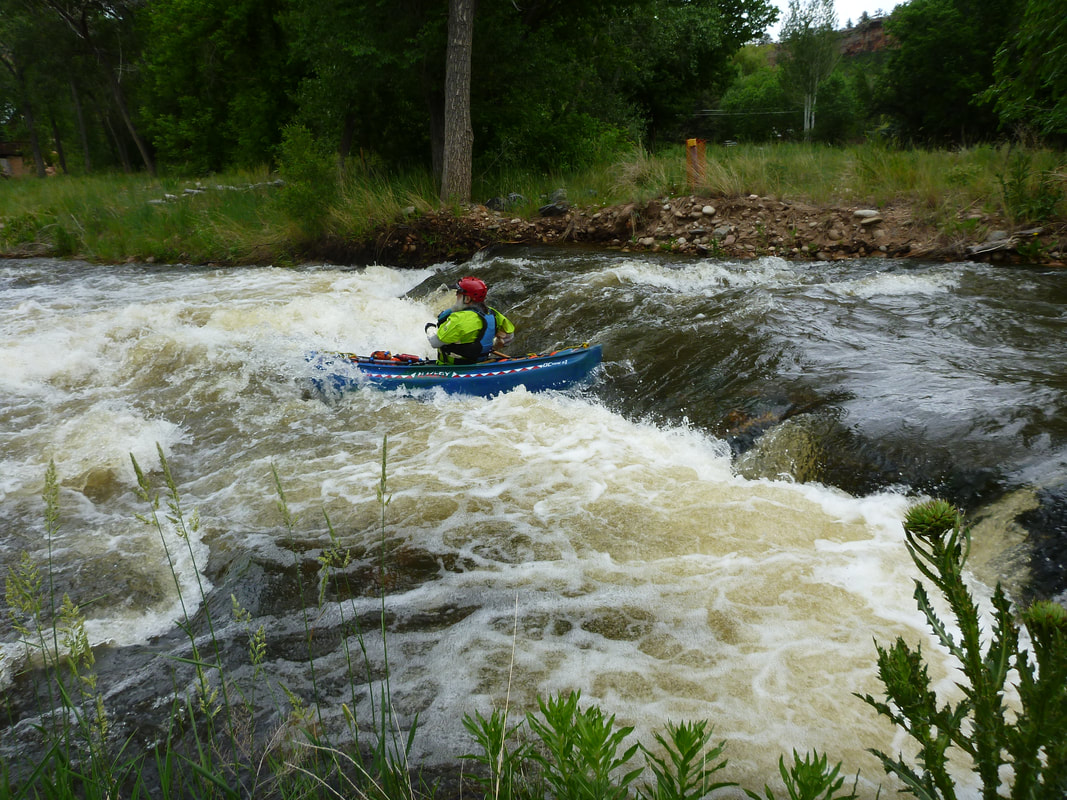