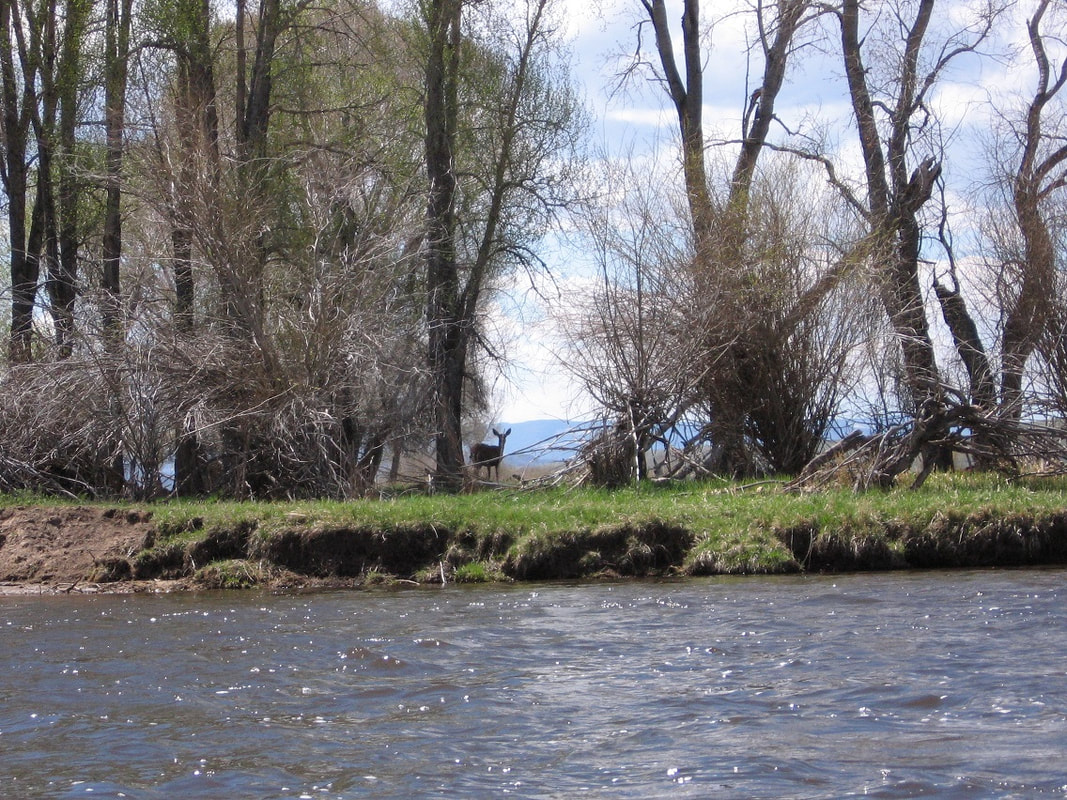 Date: We usually drive to Saratoga Friday after work and float on Saturday, then either drive back or float a short stretch of the river on Sunday.
The put-in is 8:30 am, Saturday, June 26, 2021 at Treasure Island. See the itinerary below for the details.

Overview: The North Platte River starts in Colorado and flows north between the Snowy Range on the east and the Sierra Madre Mountains on the west. It is lined with cottonwoods and large bluffs. The wildlife includes deer, antelope, Great Blue Herons, pelicans, Canada Geese and Bald Eagles. It is a 12 mile float from Treasure Island to Saratoga where we stop and have lunch at the Hobo Hot Springs. It is then 6.3 miles to Foote Campground or 10.8 to Pick Bridge.

Rating: Class 1+. The plus is because in the spring the river may be running high, like 4000 cfs and fast. There aren't any rocks to avoid, but
you have to be able to avoid strainers (fallen trees) and should have had some experience floating in moving water. Everything in your boat should be tied down and you should be prepared to get wet. Anytime you go on the water, you should be prepared to get wet. Wear quick-drying clothes, or take a change of clothing in a dry bag.

Wyoming Decal: If you are floating a boat in Wyoming, you need to purchase an invasive species decal. Only inflatables of 10 feet or less are exempt. You can purchase the decal for $15.00 at this link or at any store in Wyoming that sells fishing licenses.

Link to purchase a Wyoming Decal.

If you order online, you need to have a printer so you can print a receipt that is good for 15 days. They will mail you the actual decal within 10 days. We were checked on the North Platte river once. You need a separate sticker for each boat you float in Wyoming. The money goes to trying to keep invasive species out of Wyoming.

Wyoming Inspection: All boats have to stop and be inspected as they enter the state during the summer months. That includes canoes and kayaks.
The inspection stations are only open certain hours, so you will have to plan your trips accordingly. This will affect all floats on the North Platte. If you plan on driving up 287 to Laramie, then the inspection station is at the Port of Entry, 1 mile south of Laramie.

Friday: The drive from Northern Colorado to Saratoga takes about 3 1/2 hours, so it is advisable to drive to Saratoga on Friday. Take 287 to Laramie. Stop at the Port of Entry 1 mile south of Laramie to get your boat inspected. Go west on I-80 and immediately exit on Wyoming Highway 130 Snowy Range Road. Then go south on Highway 230 from Laramie, which goes back to Colorado and becomes Highway 127. When 127 and 125 cross, take 125 north towards Saratoga. As you leave Colorado, 125 turns back into 230. Follow 230 North where it joins with 130 and enters Saratoga.

The snowy range road (130) will probably not be open over the mountains. If it is open, take 130 and stop at Lake Marie. Lake Marie is a beautiful lake. 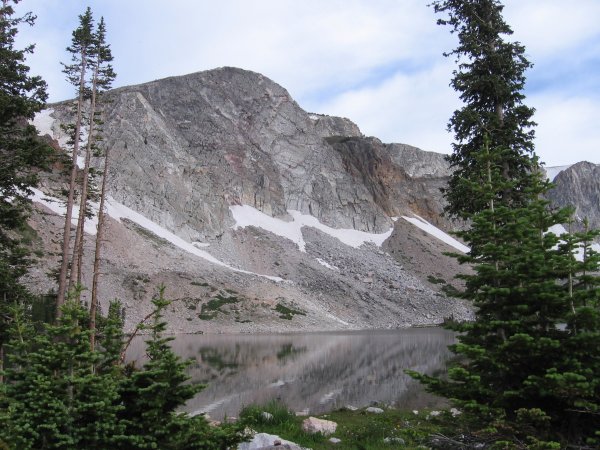 The third route is to stay on I-80 and go south on 230 into Saratoga. The I-80 route has a lot of big trucks, but you do see a lot of windmills. The most scenic route is 130 over the mountains, although the south route on 230 is also very pretty.

Places to stay near Saratoga: 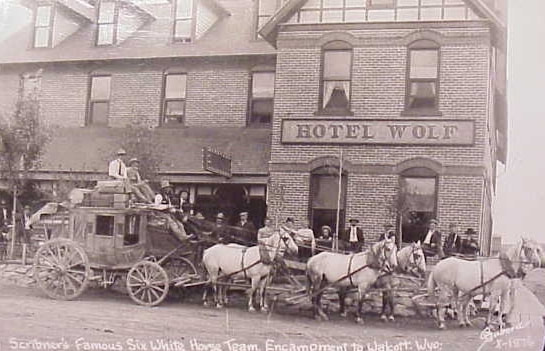 6:00-8:00 pm, Friday Evening: There will be an optional dinner/meeting Friday evening in the bar or restaurant of the Hotel Wolf. It is important to consume a lot of fluids before a long float trip. The Hotel Wolf is in downtown Saratoga at the corner of Highway 130 and Bridge Street.

9:00 am: Unload equipment. Make sure you have, as a minimum: sack lunch, canoe/kayak, paddles, PFDs, water, hat, rain gear, jacket, sunscreen, sun glasses, bug repellant, and a small first aid kit. If you are going to wear cotton, then you should bring a dry bag with a change of clothes. On any float trip there is the possibility of getting very wet.

9:30 am: Some paddlers will stay with the equipment while one person per car drives the shuttle. Put your car keys in a safe place, like inside a zippered pocket on your life jacket. It is advantageous to take two keys. The people staying with the equipment should take turns checking out Treasure Island. There is a swinging bridge out to the island. The drivers will head north on 230 and go to the boat launch at either Foote Campground or Pick Bridge. One or two cars will take the drivers back to Treasure Island.

10:30 am: Go over safety rules. The river flows through private and public property. Property boundaries are marked along the river by red and blue squares. Property behind a red square is private and behind a blue square is public. From Treasure Island north, the land is almost entirely private.

1:00 - 2:00 pm: We will stop for lunch at the Hobo Hot Springs in Saratoga. Bring a sack lunch to eat at the picnic table. You will have time to spend a few minutes in the hot springs.

4:00-6:00 pm: We takeout at either Foote Campground or Pick Bridge. Pick Bridge is 4 miles downstream from Foote.

If you have questions, contact Roger Faaborg. roger@rff.com, Cell phone: 970-646-5706. In case the weather forecast is terrible, we will pick a another date. Make sure you notify me if you are interested so I can contact you about any changes to the trip. 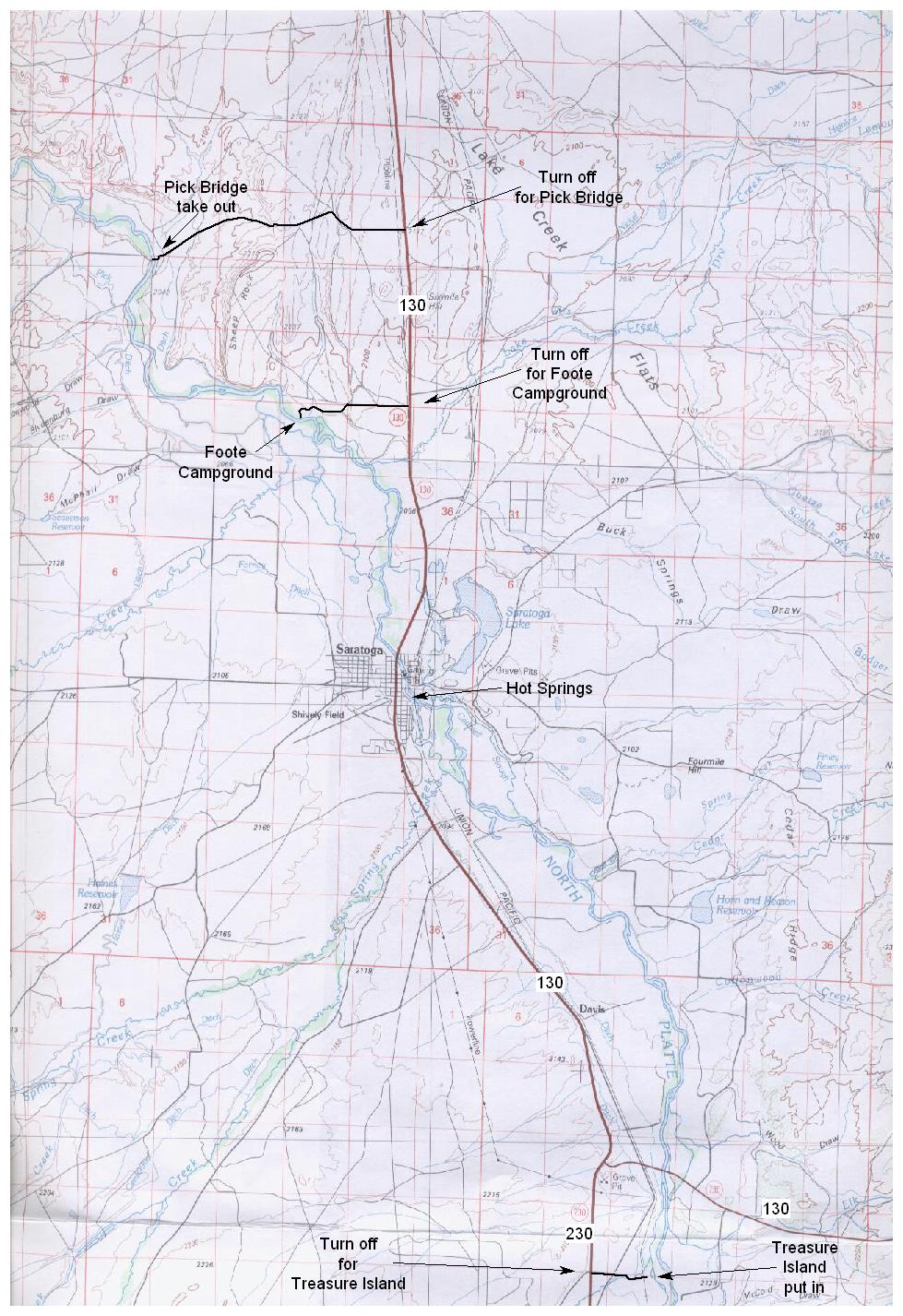