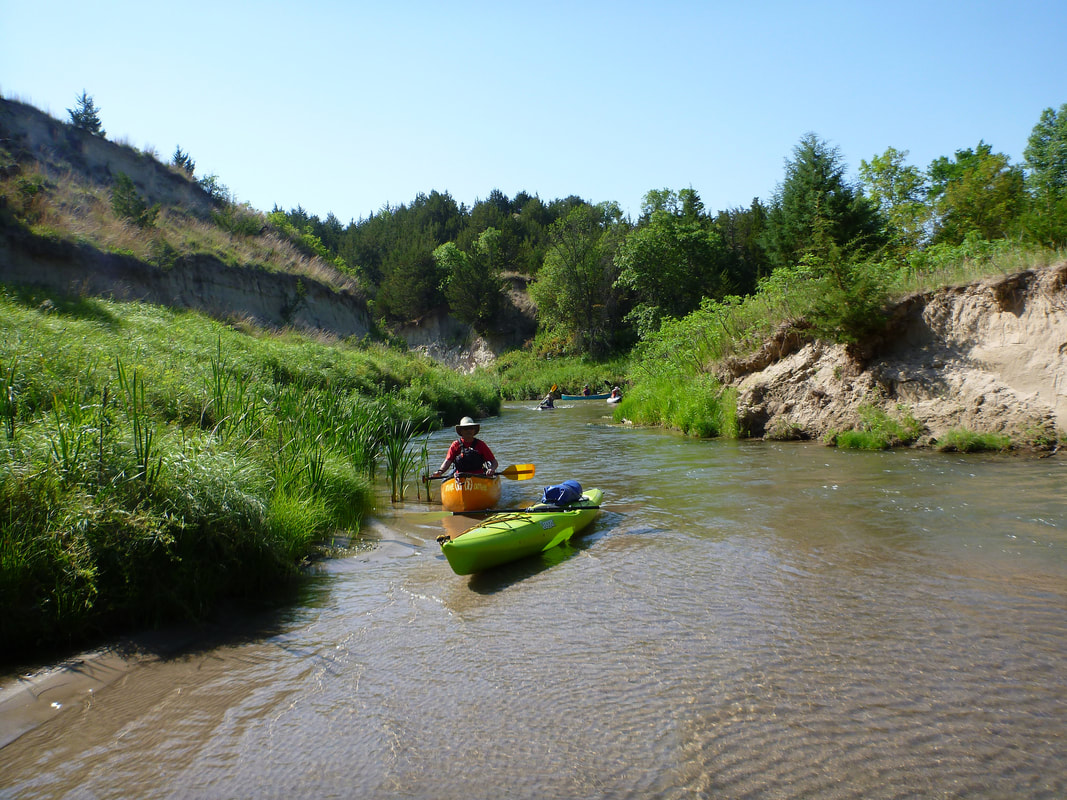 The photo above shows the Dismal River near the put-in.
Overview: The Dismal River is a small 200 cfs river in the sandhills of western Nebraska. Because it is spring fed, it flows at around 200 cfs all year. It is only 80 miles long. The current is 6-8 mph so it moves rapidly.  The river has cut a path about 150 feet into the sandhills. The water provides for a lot of plant growth, forming an oasis totally different from the surrounding dry hills.

We used to float the Dismal as a two day camping trip. We would start at the Highway 97 bridge, float to the Seneca Bridge and camp there. The second day we would float from Seneca to the Jameson Bridge. All the land is private and the Jameson Bridge is no longer a possible take-out. You have to continue to Highway 83. That makes the second day too long. Most boaters were satisfied with paddling just the one day from Highway 97 to Seneca Bridge. So this write-up describes a one day float on the Dismal. That also allows you to paddle without your canoe being filled with camping gear. You may want to combine the Dismal float with a float on the Niobrara River.

Date: We will drive on Friday, October 14th, float Saturday, October 15th and drive back to Colorado on Sunday, We will camp on the river at the Seneca Bridge on Friday night.

Class: The Dismal is Class II because of the numerous dead trees that have fallen in the river. There is one place where the river narrows and you go down a chute as shown in the picture below. This can be easily portaged or you can run it. 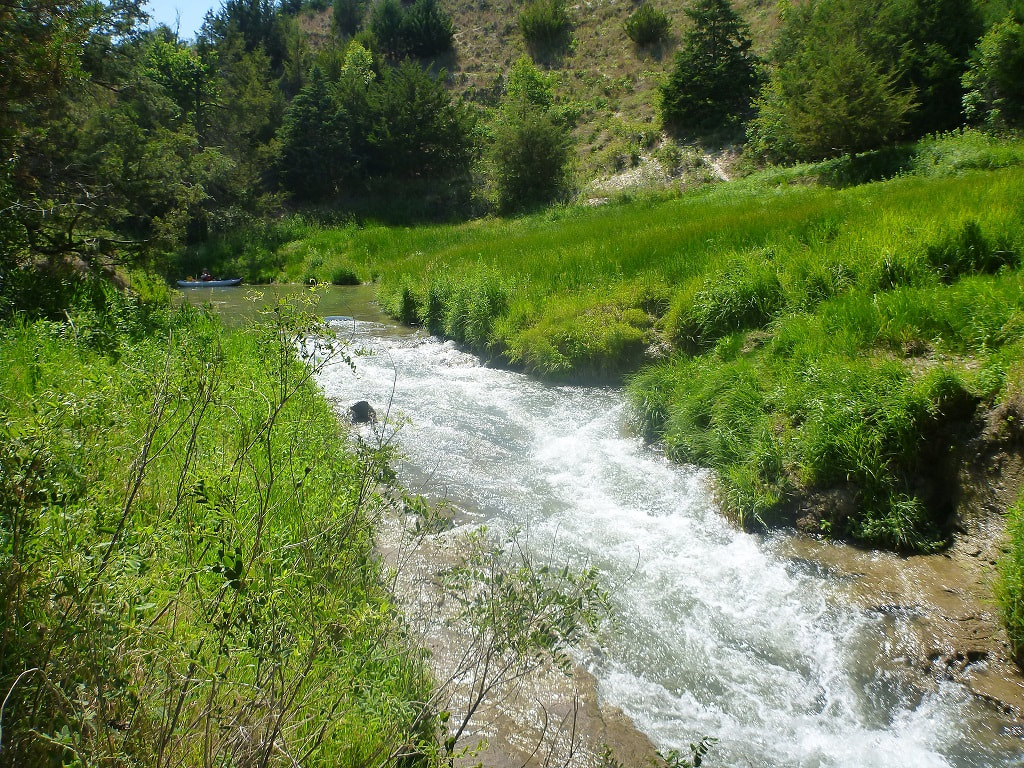 Video: The video below shows a trip on the Dismal and includes showing canoes going down the rapid.

Marketing Video for the Dismal River 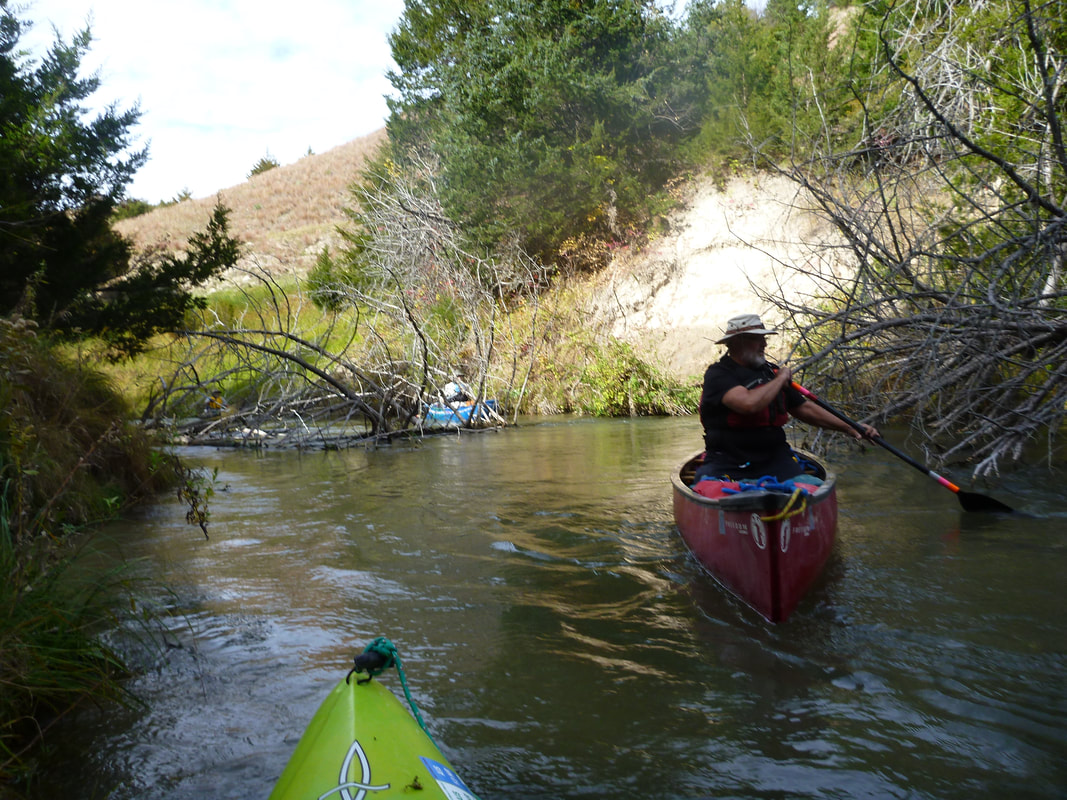 The picture above shows how you have to maneuver your boat around the many downed trees in the Dismal.
Itinerary:
Friday: We will drive to Mullen, Nebraska to pay for the private campgrounds we will be using. Mullen is about 300 miles from Fort Collins, which is about a 6 hour drive. You pay at the Sandhills Motel, 507 SW 1st Street, Mullen, Ne 69152.  The last time we paid $10 per night or $20 total for two nights at the Seneca Campground.  We then drive to the Seneca Bridge, south of Seneca, Nebraska. After paying at the motel, drive east from Mullen about 12 miles on Highway 2 to the town of Seneca and then head south on the narrow gravel County Road 86A (S. Seneca Avenue) to the Seneca Bridge. It is best to reach the campground in daylight, so you have time to set up your tent in the light.

Saturday 8:00 am: If you pay for a shuttle, Mitch Glidden of Glidden Outfitters in Mullen can show up with a bus and trailer to take you to the put-in. The put-in is 15 miles south of Mullen on Highway 97. This is where the Dismal crosses the road. If you do your own shuttle, then you have to do the usual process. Take a sack lunch and the usual day trip gear. Pack lightly as the Dismal is shallow. The put-in involves lowering the boats by rope down a dirt slope. See the picture below. 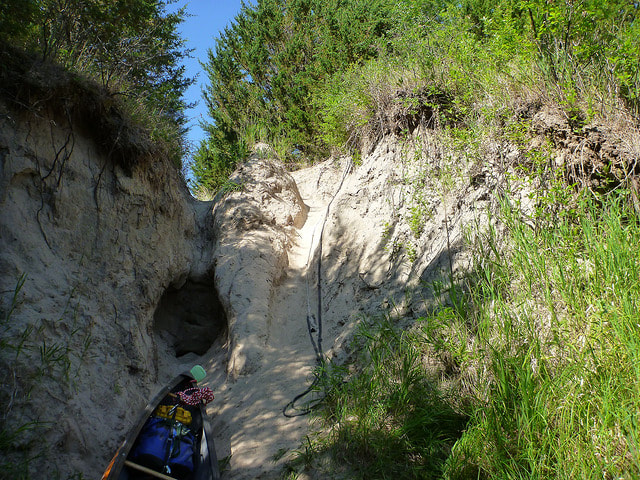 The put-in on the Dismal River
Saturday 9:00 am: If you paid for a shuttle, then you can now start floating the Dismal. If not, one person in each car will drive the shuttle. The
shuttle goes back to Mullen, then east to Seneca, then south to Seneca Bridge.  The shuttle distance is about 40 miles each way. The road south from Seneca is gravel. I would advise paying for the shuttle, as you won't get on the river until about noon if you drive your own shuttle.

Eventually we will start floating down the Dismal. In the stretch between the put-in at Highway 97 and Seneca Bridge, we will see: 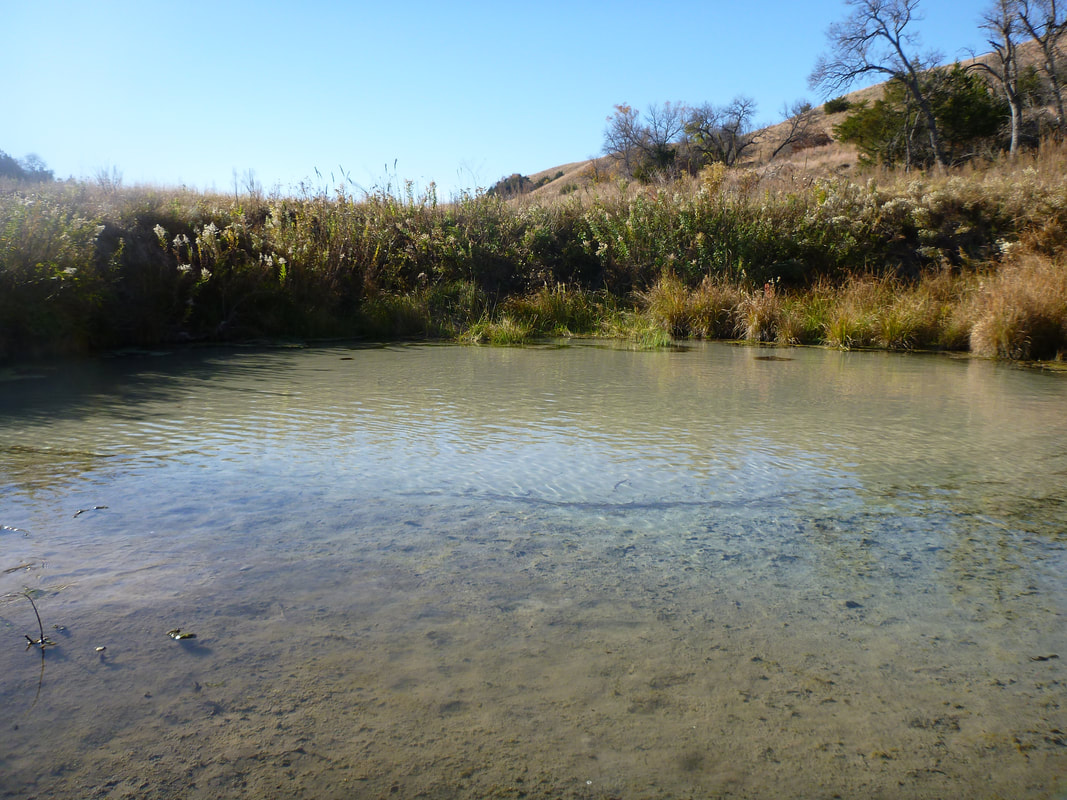 The photo above shows a big pool along the Dismal. The water is bubbling out of the ground. On warm days, you can walk into the pool and the flow will support you. You do get your clothing filled with sand and the water is cooler than the river.
Saturday 6:00 pm: It is about 15 river miles from the put-in to Seneca Bridge. There is an outhouse at the campground. We will set up camp and eat
the evening meal.

Sunday Morning: Drive back to Colorado.
The video above was made by Mike Koliha and shows the kind of obstacles you have to avoid on the Dismal. 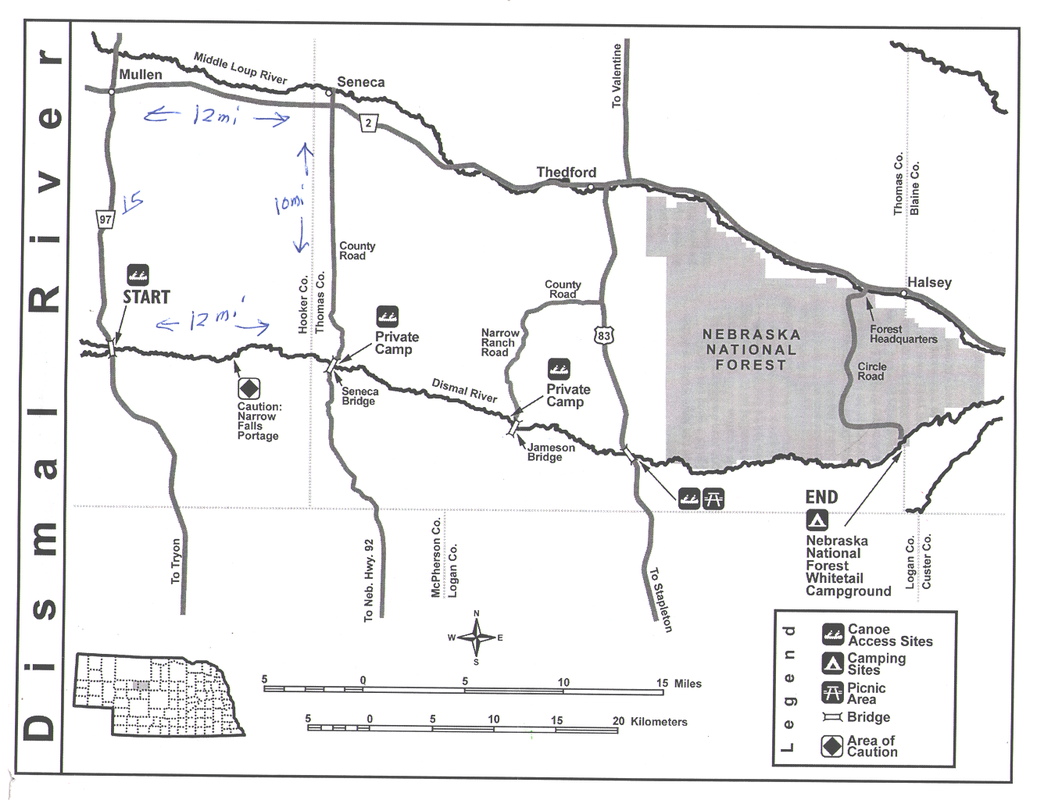 Map of the Dismal River 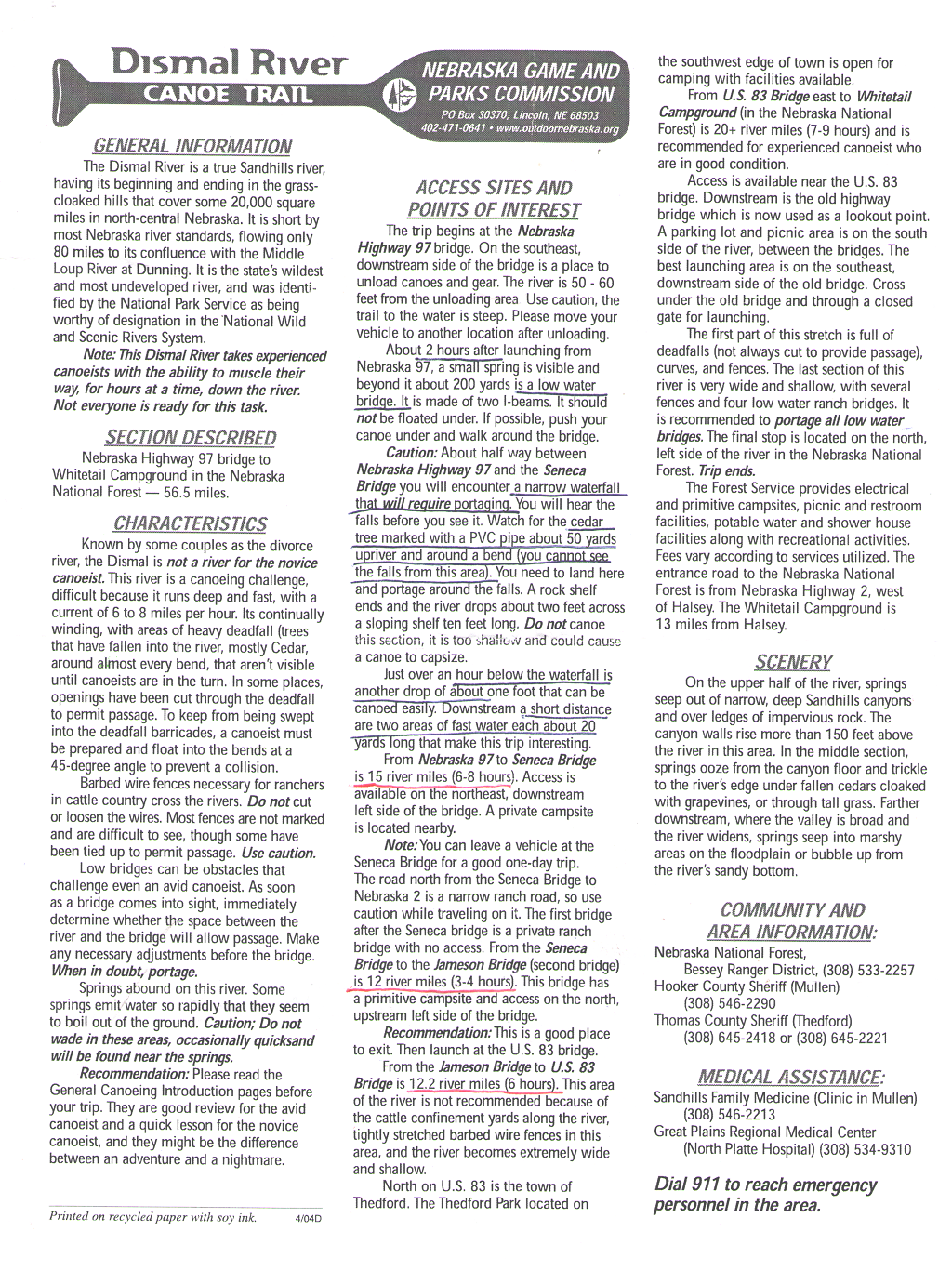 The information above goes with the map. Some of this is out of date. The Nebraska Game
and Parks Commission no longer has information on the Dismal.
Some Phone Numbers (which may be out of date):